Many poker players are engaged in the sport for the pure love of the game. However, there are just as many poker players who hone their skills primarily to get their hands on the cash prizes at stake. With the huge sums of money that came up for grabs last year in high-stakes poker, the drive to emerge on top of the huge hands that were in play last year comes as no surprise. While most of the largest sums of money are exchanged at live tournaments where players come face to face, considerable sums of money change hands during online poker matches as well. Below, you will find some of the most substantial winnings to occur last year in the digital world of high-stakes poker. 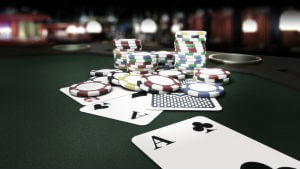 The largest sum of money riding on a single hand occurred during a No Limit, Hold’em match that took place between WCG Rider and Denoking on Full-Tilt Poker. At the “Sele” table, both players were all in while simultaneously holding cards of considerable value given the flop. Rider came out on top with a pair of aces that took the pot away from Denoking’s two kings. In all, the hand was worth a stunning $382,827. This hand took place only a mere hour after the players had engaged in a match that was worth $338,760.

Gus Hansen made the list for top online winnings at the same online poker site playing on the “Coventry” table. The action on the flop was considerable during this online, Hold’em hand. In the end, Gus Hansen had the only flush draw on the board, allowing him to win a stunning $355,144. Viktor Blom took home a considerable amount of money from Full-Tilt Poker in a showdown that included himself, Dan Cates, and Gus Hansen. Ultimately, Cates folded his hand while Blom raised his remaining stack with a straight in his possession. Once all the cards were on the table, Blom walked away with a cool $372,260.